Many travelers first learn about Bolzano, Italy while researching a trip to the breathtaking Italian Dolomites and make the mistake of overlooking this charming Italian town, enveloped in a rich history and ripe for exploration.

My husband and I spent one day in Bolzano during our honeymoon and fell in love with this lively merchant town. So much so, that we decided to return for a longer visit during our second time in Europe to allow proper time to explore this colorful and pristine alpine city.

Having never heard of Bolzano prior to our trip, I was half-expecting to find a tiny village without much to do. Boy, was I wrong. Imagine my (delightful) surprise when we quickly discovered that there’s so much to do in Bolzano and my assumption could not have been further from the truth!

Have I been living under a rock this whole time? Rhetorical question, let’s just jump into everything you should know about visiting Bolzano, Italy. I hope you enjoy!

Bolzano is an authentic market town in the shadow of the dolomites, awash with merchants rain or shine. The city’s authenticity is spellbinding; in many ways, it feels like a return to simpler times.

Walking and biking are the best ways to get around Bolzano, Italy

German is the spoken language of Bolzano

If you are driving a car into Bolzano, be aware that some streets are restricted to non-residential vehicles

While most of Europe is over-flooded with tourists, Bolzano remains obscure. A small corner of the world not yet revealed to all.

What is Bolzano, Itlay known for?

Bolzano is often referred to as the Gateway to the Dolomites because most folks first learn about this city while en route to the Dolomites. But that’s not all this incredble Italian city offers!

Bolzano is also known as the Capital of Christmas due to the famous Christmas markets that occur during the holidays(a bucket-list worthy event) and is also famous worldwide for the South Tyrol Museum of Archaeology – home to the famous alpine iceman called Otzi.

Photo from our room at an Inn in South Tyrol (NOT Bolzano), Italian Dolomites looming in the background.

Getting to Bolzano, Italy 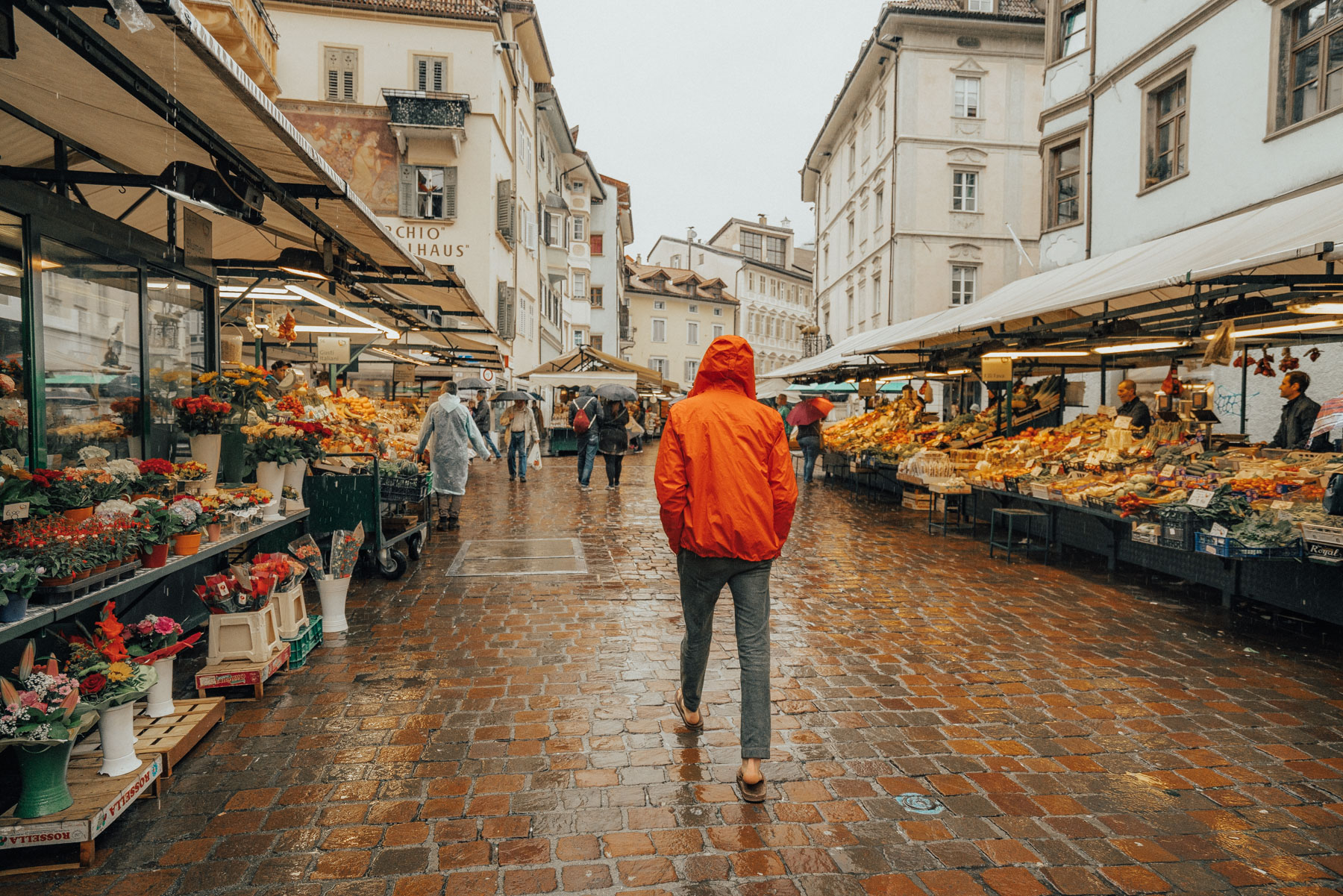 My best guess is that most visitors arrive to Bolzano by car due to proximity to the Dolomites. Based on our experience, driving in Bolzano is quite a headache! If you are arriving via car, the following things are helpful (and important) to know.

Be mindful of the Limited Traffic Areas (ZTL Zones) mentioned earlier. Click here for a map of the ZTL Zones in the city center.

On-street parking is tricky to figure out. Figuring out where to park on the street can be tricky because stalls are color coded. White slots are free (there may be time restrictions though), blue slots require payment, yellow slots require permits and pink stalls are only for pregnant women. To avoid fines, we park in a public parking lot.

Fiera Bolzano offers free public parking and has 800 spots, the parking lot is open Monday through Friday from 7:30am to 8:30pm. Note: parking is free unless there is an event taking place on premise.

Where to stay in Bolzano

I recommend staying at either Hotel Citta or Parkhotel Laurin. Both hotels are historic and located in the heart of the city, Piazza Walther.

One Day in Bolzano, Italy

Start your day by visiting the South Tyrol Museum of Archaeology ($10 per person). The biggest draw is a 5,000 year-old iceman discovered in this area by the name of Otzi.

Three floors of the museum are dedicated to documenting his life and visitors can see his preserved body. Free audio guides are provided in English.

Upon leaving the museum, head to the city center to explore the vibrant street market. As the aroma of homemade sausage waltzes through the air, might I suggest a warm pretzel or baguette?

The street is lined with beautifully arranged stalls and merchants eager to please. There’s quaint little restaurants and shops nestled between stalls.

We strolled into a random cheese store and the smell was enough to make me weak in the knees.

Walk a few blocks over and sit down for a coffee break at Café at Piazza Walther. This area is epitome of a fairytale. Picture homes and shops swathed in delicate hues encircling the city square.

There’s no better place to take a break and take in the character of Bolzano.

From Piazza Walther, you’ll notice Duomo di Bolzano. That’s our next stop. Hop inside to tour the duomo. The interior isn’t as flashy as most cathedrals in Europe, but it’s still worth checking out because you’re mere steps away.

After exploring the Duomo, head to Fishenbanke for lunch. If you’re lucky, the gripping owner will welcome your personally. Even if you’re not lucky, the caprese salad will leave you feeling like a royal.

The tomatoes were so fresh I’m sure they were picked an hour prior!

Things to do in Bolzano after lunch

What better way to burn off lunch than to take a walk over to the Monumento della Vittoria. This is a war monument dedicated to fallen soldiers from the first World War. It reminds me very much of the Arc di Triomphe in Paris.

If you’d like to walk further, I highly suggest toward Guncina walk. This little hike provides a vantage point with panoramic views of the city and mountains. Bolzano is chock-full of beautiful, green walkways.

The Guncina walk is my personal favorite, but you can also was Osvaldo or Virgolo walk. If you’re interested in finding a walking path in Bolzano, swing by the information office for a free map.

On you way back to the city center you will walk through the main streets of town, swing by any shop that catches your eye for a local souvenirs. The street is bursting with a variety of vibrant boutiques – from designer stores to chocolate shops.

You’re sure to find something you’ll like here (or something to gift a friend).

End the evening by grabbing dinner at Hopfen & Co. The brews here are my favorite in Italy. During our first visit to Bolzano we had the homemade soup and it was so, so good.

During the second visit we had a meat dish of some sort (equally delicious!). We were handed a basket of complimentary bread (5 different varieties) to tide us over while the meal was prepared.

Needless to say, we do no count calories on vacation, my friends. Brews and bread – this is the life.

After dinner, continue roaming the quaint streets of Bolzano and try to linger as long as possible. I never felt unsafe in this town, regardless of the late hour. The evening is yours, get lost and make memories!

Unique Things to do in Bolzano

Want to know just how cool Reinhold Messner is? Here are some quick facts:

Reinhold Messner is a real-life Indiana Jones! The Messner Mountain Museum will be the first thing I see during my next visit to Bolzano.

I saved this section for last because it is lengthy. But it’s definitely worth a read because Bolzano’s history is incredibly interesting.

Bolzano’s riveting history fascinates me. The reason German is the main tongue is because the area originally belonged to the Austrian Empire until the end of first World War in 1918.

In 1915, behind closed doors, a secret treaty between Italy and the Allies was drafted that promised Italy the southern part of Tyrol for their participation in the war.

Italy promptly declared war on Austria-Hungary and was rewarded by receiving South Tyrol. After the war, an armistice was signed between Austria-Hungary and Italy and Tyrol ceded to Italy. At that time, the region was predominately German-speaking, with 92.5% of the population considering themselves Germans.

When Mussolini became Prime Minister, he began a systematic re-programming to “Italianize” South Tyrol. German was forbidden to be taught in schools and places were renamed to their Italian equivalents.

Italian architects were brought in to create an Italian version of Bolzano, an undertaking so acute it included replacing German-speaking civil servants with Italians. All the while, a storm was brewing, and a secret underground school formed where German speakers were teaching students the native language.

So what happened next?

Well, in 1939 things came to a head. Mussolini wanted South Tyrol to have the character of an authentic Italian city but Hitler expected that all his acquired territories would be German regions. Residents of South Tyrol had to make a choice: relinquish their German heritage and remain in South Tyrol or move into the German Reich.

This coercion effectively tore the community apart. Cultural roots were uplifted, families divided and those who remained were considered traitors.

After the fall of the Fascist regime, German-speaking residents demanded annexation by Austria or cultural autonomy within Italy.

The Italian government granted the latter request in 1947 and 1969. That is why most of the signs in Bolzano will be in German first, Italian second and English last. In sum, even though Bolzano calls Italy home, her eyes look to Austria longingly.

The simplicity and innocence of Bolzano feels like a living story book. We enjoyed our visit so much we drove 4 hours out of the way to see it a second time and plan to return many times more. 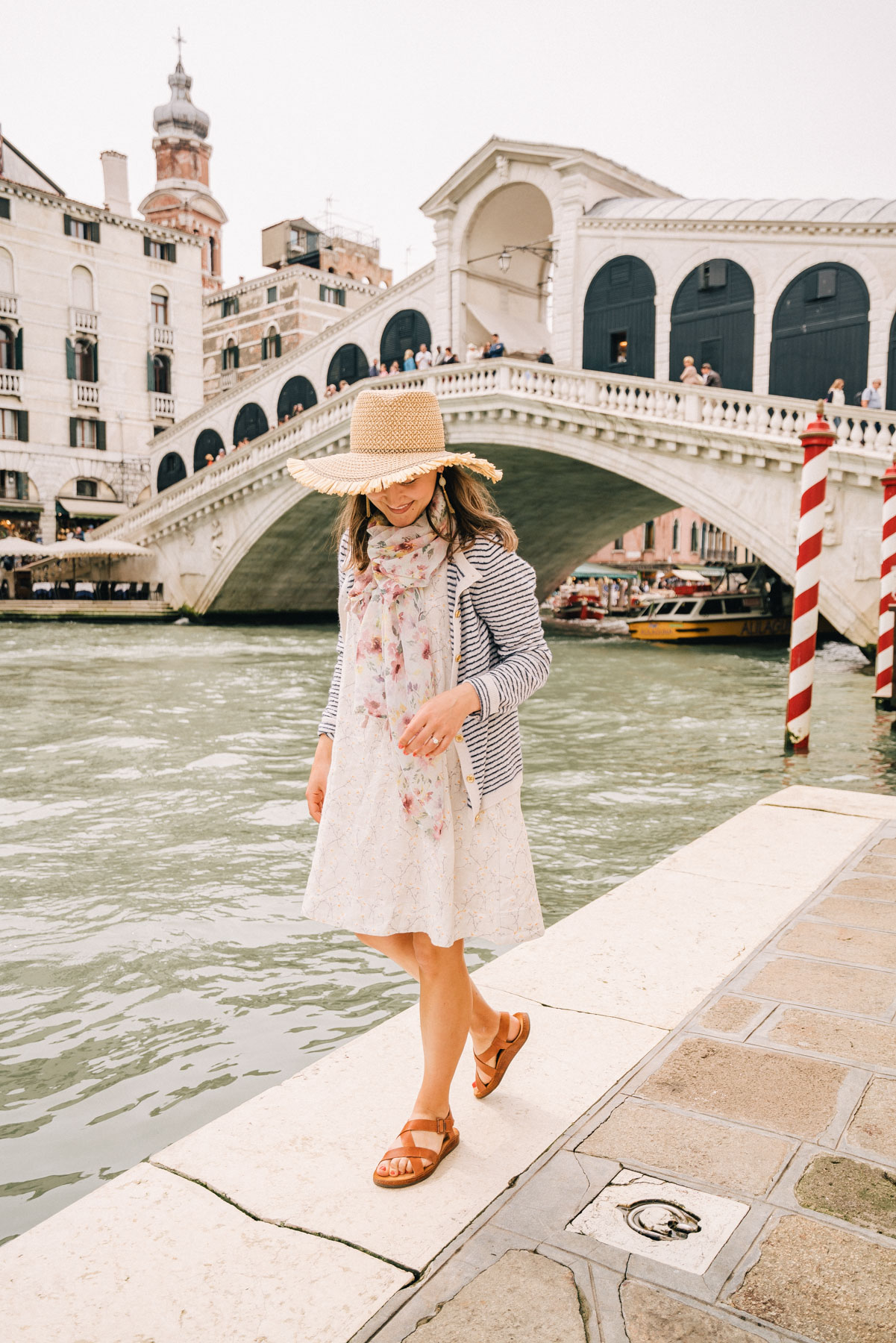 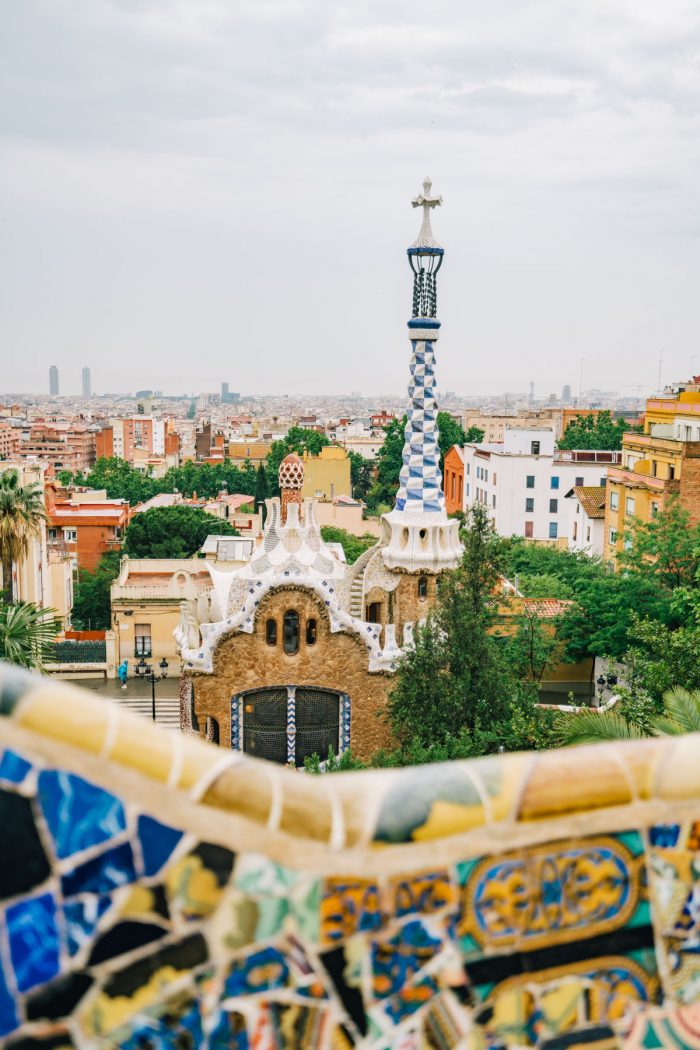 10 Best Things to Do in Barcelona 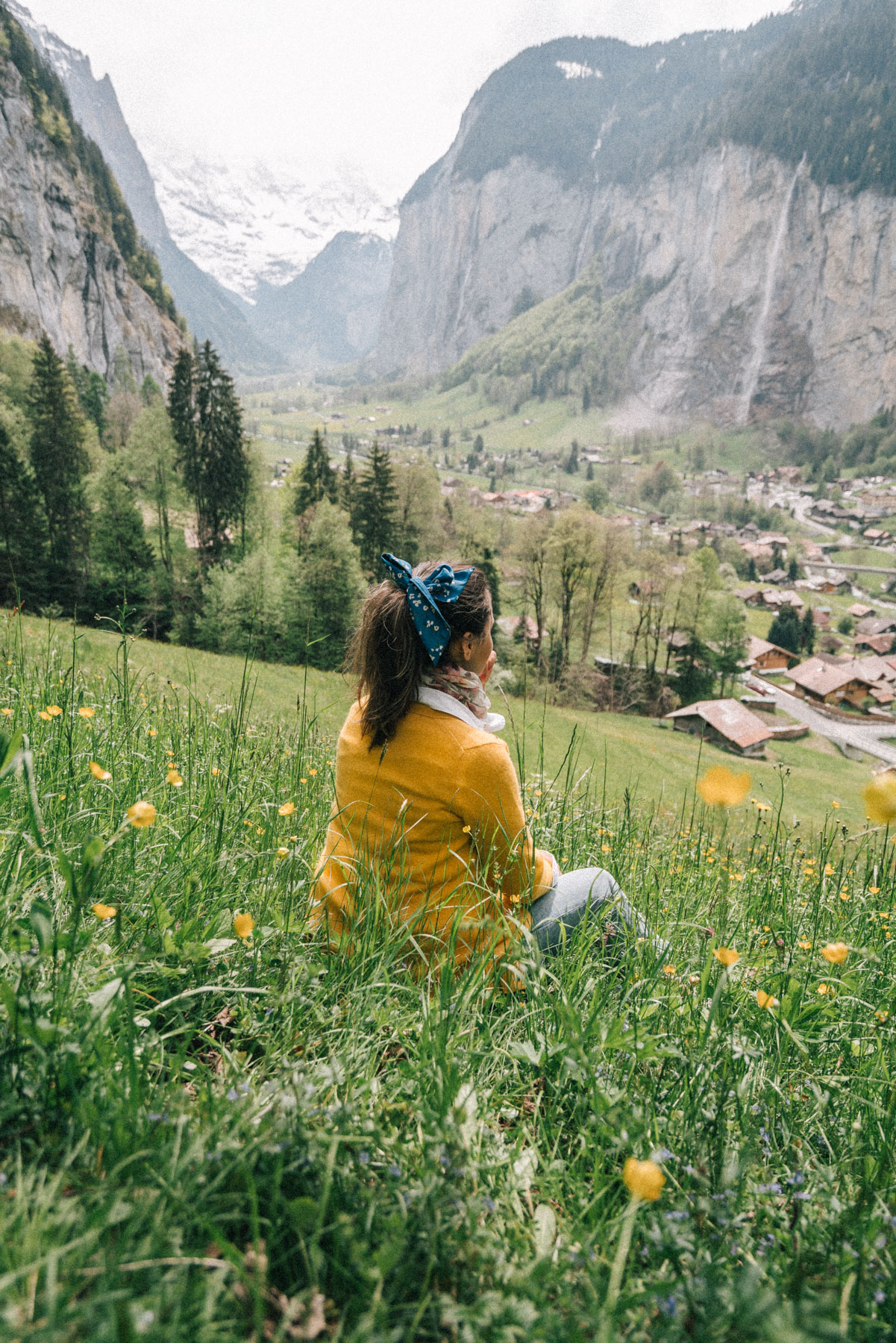 10 BREATHTAKING Things to Do in Dreamy Lauterbrunnen, Switzerland 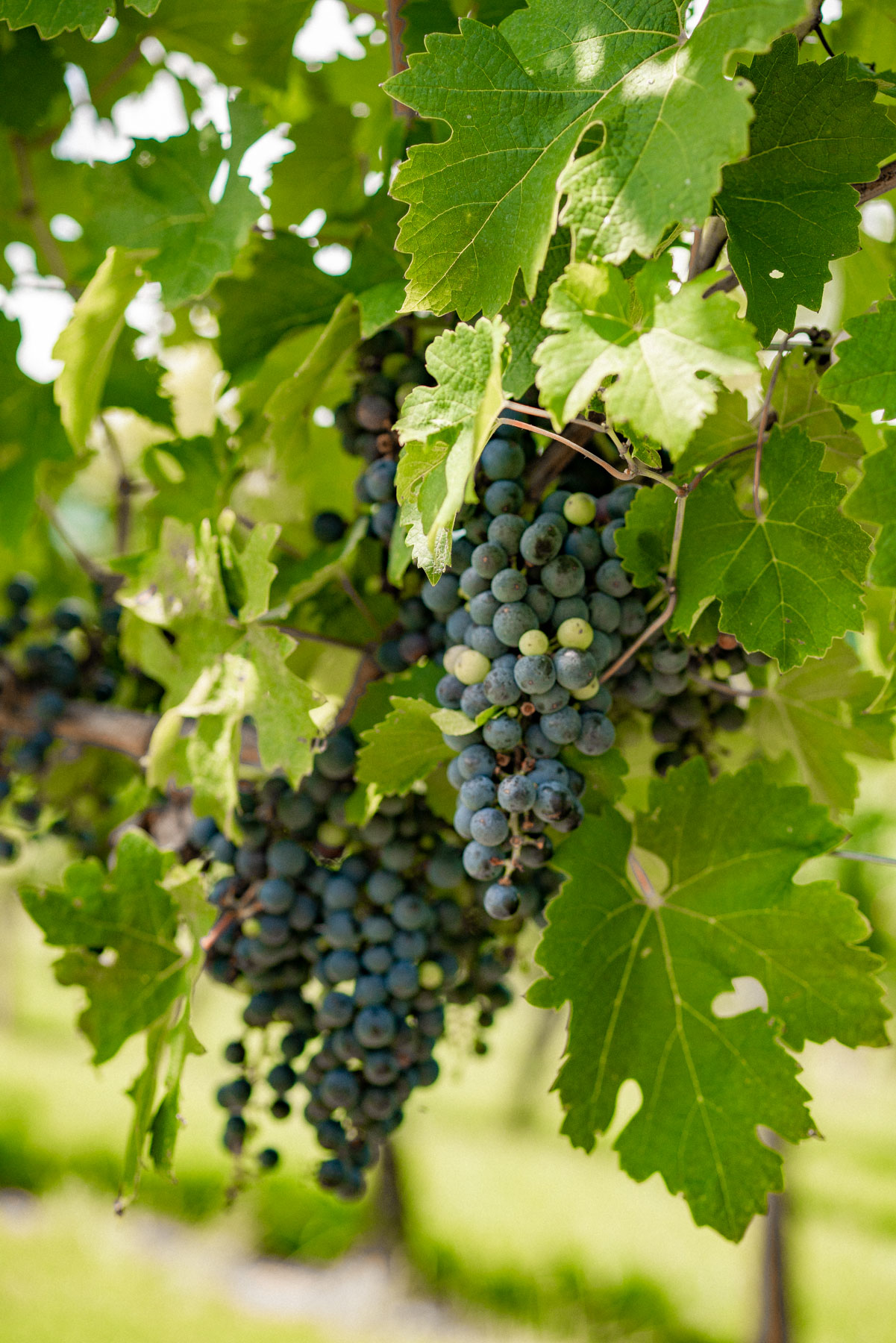